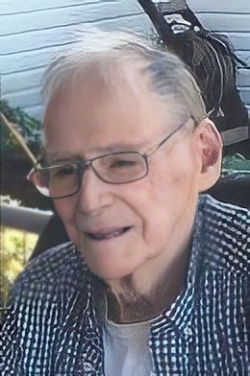 Visitation Information
Visitation
No formal visitation or funeral by personal request.
Requested Charity
A charity of your choice
Make A Donation

The death occurred on November 12, 2022, at Western Hospital, Alberton, of Lloyd John McCue, of Alberton, age 96 years. Born at Boston, Mass, on December 12, 1926, he was the son of the late Emmett Angus and Clara Rose (nee O'Shea) McCue.

At an early age the family moved back to Prince Edward Island and built their homestead in Montrose.

He will also be remembered by his children and their families: Bloyce Hutchinson (deceased), of PEI, Marlene (Lorne) Schut, of Ontario, Arlene (Ken) Young, of Ontario, Debbi McCue, of PEI, Brian (Brena) McCue, of BC, Gail (Ron) Driver, of Ontario, Bonnie McCue, of Ontario, and Kimberley (Jefferey) Gill, of Massachusetts.

The family would like to sincerely thank all the wonderful people from the Tignish Seniors Home, who embraced Lloyd as a loving and grateful member of their family, and to the wonderful team from the Western Hospital, Alberton, PEI, who truly helped his final days be as warm and peaceful as anyone could ever ask for.

As per Lloyd's request, there will be no formal funeral, visitation, or service. A private graveside service will be held at a later date.

As an expression of sympathy, donations in his name, to your favourite charity or cause, would be deeply appreciated.