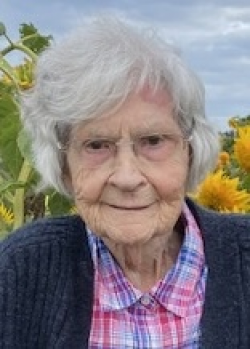 The death occurred peacefully at the Community Hospital, O'Leary, on Friday, September 30, 2022, with loved ones by her side, of Rachel Theresa Miller, formerly of Tignish, age 100 years. Born on April 29, 1922, she was the daughter of the late Louis and Rosetta (nee Handrahan) Harper.

In lieu of flowers, donations to the Tignish Seniors Coop Home Long Term Fund, would be gratefully appreciated.

The Tignish Council of the CWL will hold a Prayer Vigil for their departed member Tuesday evening at 5:45 p.m.