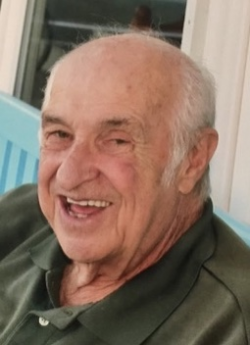 It is with deep sadness that we announce the passing of John (Jack) Lloyd O’Brien, of Alberton, on September 30, 2022. The death occurred peacefully, with his daughters by his side, at the Western Hospital, Alberton, PEI. Born in Ellerslie, PEI, on February 23, 1931, he was the beloved husband of the late Beatrice O’Brien, and son of the late Lloyd and Sarah (Morrison) O’Brien.

Father to six children including Judy (Pat), of Calgary, AB, Michael (Veronica), of Regina, SK, Joe (Paula), of Edmonton, AB, Patrick, of Nanaimo, BC, and Maureen, of North Vancouver, BC, and grandfather to 9 grandchildren. He was predeceased by his son Lloyd (Sheri) of Nanaimo, BC, in September 2022.

Jack and Bea moved to Montreal and raised their family in Dollard des Ormeaux, before transferring to Winnipeg, and then to Moncton. They finally returned back to their much-loved Island, upon retirement in 1989. Jack worked almost his entire career with General Foods. He was a master bridge player, a voracious reader, and an avid chess player. He especially enjoyed watching harness racing and baseball. Jack and Bea committed much of their retirement to creating the Joe O’Brien Museum in memory of his uncle and other maritime horsemen. He had a great sense of humour, a dry wit, and an unusually good memory. Jack was a wonderful husband, father, grandfather and friend, and we are all richer for having had him in our lives.

Survived by siblings Colleen Williams (Denny), of Burlington, ON and Terry O’Brien (Candous), of Washington, PA, as well as several cousins, nieces and nephews.

Thanks to the staff at the Western Hospital and the ongoing support from the Mobile Integrated Health program. A very special thanks to friends and neighbours who made his last few years without Mom more manageable.

No funeral or visitation by personal request. A private interment service to take place at a later date at the Sacred Heart Cemetery Alberton. As an expression of sympathy, donations to the Western Hospital would be gratefully appreciated.