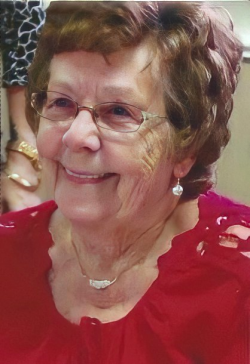 The death occurred peacefully, at the Palliative Care Unit of the Western Hospital, Alberton, on Saturday, July 2, 2022, with her loving family by her side, of Lily Mae Riley (nee Henderson), aged 87. Predeceased by her first husband, Ivan Adams, in 1996, and her second husband, Marvin Riley, in 2013. Born in Alma, March 24, 1935, she was the daughter of the late Thomas and Martha (nee Currie) Henderson.

Loving mother to Chester (Fern), of Alberton, Darlene (Jerry) Blanchard, of Elmsdale, Allen (Janet), of Northport, Karen (James) MacDonald, of Edmonton, Cathy (David) Lidstone, of the Brae, Sandra (Glen) Ellis, of Alberton, and Glenn (Angela), of Alberton. She will be sadly missed by her 20 grandchildren and her 35 great-grandchildren. Dear brother of Robert Henderson, of Alberton, and Angela (Doug) MacCallum, her chosen sister, of Brooklyn.

She was predeceased by infant daughters, Ruby Marlene, and Betty Mae, and by a great-grandson, Brodie.

As an expression of sympathy, donations to the Western Hospital Fund or to the Elmsdale United Church Cemetery Fund, would be gratefully appreciated.

www.rooneyfh.ca
The funeral will be live streamed on the Rooney Funeral Home Facebook page, beginning at 11:00 a.m.