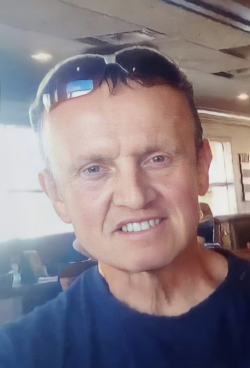 The death occurred at the Queen Elizabeth Hospital, Charlottetown, on Saturday, July 2, 2022, with his loving family by his side, of Joseph Blair Richard, of Grafton Street, Charlottetown, age 58 years. Born at Alberton, on May 22, 1964, he was the cherished son of Sylvia Mary (nee Poirier) Aylward of Summerside, and the late Edward Joseph Richard.

He is survived by his friend Darlene (nee Laybolt) Richard. Caring and loving grandfather to Karson and Nova Lee. Dear brother to Cindy (Allan) Brown, of Summerside, Charlene Richard, of Summerside, Jamie Richard (Nancy Doiron) of Charlottetown, and Rob (Paula) Richard, of Kensington. Dear uncle to Ashley Gallant, Amy Gallant, Ryan Brown, Michael Poirier, Nathan Richard, Hailey Stavert, Alexander Stavert and Robyn Richard. He is also survived by his aunts, uncles, cousins, and by his many friends and acquaintances.

He was predeceased by his father, Edward Richard, and by his stepfather, Gerald Aylward.

Resting at the Rooney Funeral Home and Chapel, Alberton. No visitation by request. Funeral mass on Tuesday, July 5, 2022, from the Immaculate Conception Church, Palmer Road, at 2:00 p.m. Interment in the church cemetery.