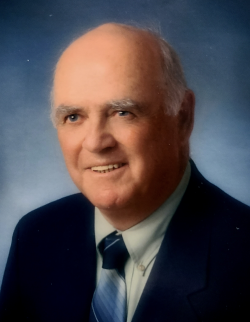 The death occurred at the age of 79, Cameron Alexander Trail, of Cascumpec, PEI, peacefully, with two hands on the reins, at home with his loving family by his side, in the early morning hours of April 6, 2022. Born a twin on February 19, 1943, in Woodstock, NB, to the late James Gordon and Mary Ann Trail (Cameron), he leaves to mourn his beloved wife of 58 years, Marilyn (Bradley), and children, Eddie (Susan) of Cascumpec, Kim Bernard (Roy) of Fort Kent, Maine, and Stephen (Jessica) of Tignish, along with his feline pal, Dozer.

He was predeceased by his parents, Gordon and Mary Ann, infant brothers, Allan and Munro, infant son, Bradley, and brother-in-law, Lenny Bradley.

Known to many as "Cam", he was a native of Lower Southampton, NB, and following a brief teaching career, moved his young family to Alberton, PEI, in 1968, after accepting a management position with Canadian Imperial Bank of Commerce. He later managed the Tignish Credit Union from 1972 to 1980, at which time he became a service agent for PEI Mutual Insurance. Upon retirement, in 2007, he continued his established passion as an owner, breeder, trainer, and driver, of Standardbred racehorses. Cam enjoyed his life in Western, PEI, and cherished every interaction he had with his friends and customers.

His cremated remains have been entrusted to Rooney Funeral Home and Chapel, Alberton. Funeral to be held Saturday afternoon from the E. Gerald Rooney Memorial Chapel, at 4:00 p.m., Rev. Erasmus Madimbu officiating. Visitation Saturday from 2:00 p.m. until time of funeral. Interment to be at a later time in the Hillcrest Cemetery.

As an expression of sympathy memorials to the Canadian Cancer Society, PEI Parkinson Society or Hillcrest Cemetery will be greatly appreciated.

Please Note:
In accordance with Public Health directive, the wearing of masks is mandatory to attend the funeral or wake.
www.rooneyfh.ca