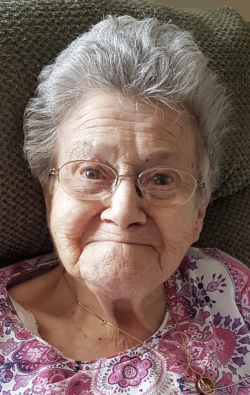 The death occurred peacefully, at the Wedgewood Manor, Summerside, on Saturday, February 26, 2022, with her loving family by her side, of Edith Mary Perry, formerly of Tignish, age 91 years. Beloved wife of the late J. Henry Perry. Born at Tignish on November 5, 1930, she was the daughter of the late Adrian and Margaret Ann (nee
DesRoches) Richard.

Resting at the Rooney Funeral Home and Chapel, Alberton. Private family visitation for (invited guests) on Monday from 6:00 to 8:00 p.m., and on Tuesday from 9:00 a.m. until time of funeral. Funeral Tuesday morning from St. Simon and St. Jude Church Tignish, for funeral mass at 10:30 a.m., Rev. John Molina, celebrant. Interment later in the Church Cemetery.

As an expression of sympathy memorials in Edith's memory made to the Tignish Seniors Co-op Home or to the Diabetes Association would be gratefully appreciated.