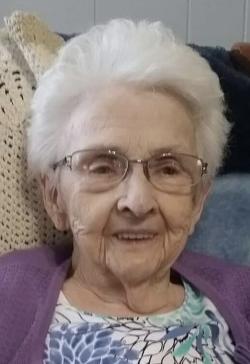 The death occurred peacefully at the Margaret Stewart Ellis Home, O' Leary, on Wednesday, December 9, 2020, with her loving family by her side, of Frances Mary Handrahan, formerly of St. Felix, PEI, age 99 years. Beloved wife of the late Alyre J. (Allie) Handrahan, who predeceased her in 1988. Born at Skinners Pond on July 17, 1921, she was the daughter of the late Charles and Catherine (nee Handrahan) Perry.

Frances  was a life long member of the St. Felix CWL, as well as a lifelong parishioner of St. Simon and St. Jude Church, Tignish.

Resting at the Rooney Funeral Home and Chapel, Alberton. A private family graveside service to take place on Saturday with a funeral mass to be celebrated at a later date at a time when all family members can attend.

As an expression of sympathy memorials in Frances' name made to St. Simon and St. Jude Cemetery Fund would be gratefully appreciated by the family.