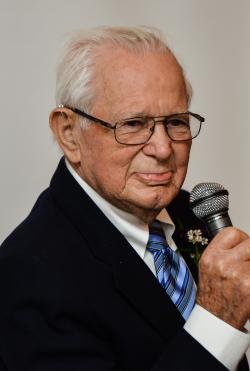 It is with great sadness that we announce the passing of our Dad and friend, Arthur Hudson Travers, on August 30, 2020 at home in Kildare Capes, Prince Edward Island. Born November 8, 1921 in the family farmhouse at Kildare Capes, Dad’s life was one that was exceptionally well lived.

Growing up on a farm in the 1920s and 1930s was tough, but everyone contributed to the chores at hand and life was good. Dad shared many stories of his adventures (and mis-adventures) growing up with his sisters Edna and Betty and brothers Billy, Clayton and Reg. Those stories alone would fill a book.

In 1941, Dad enlisted with the Royal Canadian Engineers as a sapper and was posted to Petawawa, Ontario to learn how to build bridges and trenches. But Dad had his sights set on the skies and soon transferred to the Royal Canadian Air Force. He was posted to St. Thomas, Ontario and in 1942 was accepted for air crew training, receiving his wings in January 1943. His solo flight was on the Tiger Moth. Many years later, Dad was elated to again fly a Tiger Moth as part of the Vintage Wings of Canada tour. He delighted in being to once again say "I have control". Dad graduated to the dual-engine Anson in June 1943. Later that year, he transferred to the British Commonwealth Air Training Plan and was posted to Ancienne Lorette, Quebec as a staff pilot training navigators. It was there that he met the love of his life, Phyllis, who was training to be a nurse. They were married in August 1945 and settled in Quebec City to begin raising a family.

Their home on Bishop Avenue in Ste. Foy was soon filled with six children, an assortment of dogs (the most favourite being Nipper) and cats, much laughter and lots of love. Mum and Dad loved large gatherings of family and friends and hosted many dinners. Mealtime discussions around the dining table were always lively and engaging.  Dad encouraged us all to think about issues of the day and to develop and express an opinion. Dad loved a good argument and even at the age of 98, was always keen to discuss current events and politics.

For many years, Dad worked for Tri-Bec Inc., a heating, ventilation and air-conditioning contracting company in Quebec City. Dad was a pioneer in the field of air-conditioning and oversaw the completion of major projects throughout Eastern Canada. Although he never received an engineering degree, Dad was presented with an Iron Ring in 1973 in recognition of his significant contribution to the field. Dad wore that ring with considerable pride. In Quebec, Dad was also very active with the Masonic Lodge, Trinity Anglican Church and Boy Scouts. He was committed to volunteering his time and talents to the wider community and was a wonderful role model to us.

Dad instilled in all of us a love of travel. He ensured that every summer, we travelled to Prince Edward Island to spend time at the farmhouse on Kildare Capes with Nanny and Grampa, aunts and uncles and lots of cousins. Our trips to the Island were adventures in themselves with us crammed into the station wagon, consuming snacks and drinks doled out by Mum and, somewhere in the mix, a dog that needed attention. Dad also ensured, however, that we travelled to other parts of the country. There were many camping trips to New Brunswick, Nova Scotia, Maine and New Hampshire. At some point, we graduated from a large canvas tent to the luxury of a tent trailer that was affectionately nick- named APILAPSANT.

In 1978, Mum and Dad moved to Cole Harbour, Nova Scotia when Dad started a new career with Carrier International, a leading firm in the air-conditioning world. It wasn’t very long before their home on Allison Drive was filled with family gatherings and dinners with new friends. Grandchildren and more dogs and cats became part of the scene. Mum and Dad’s mantra was always "Live, laugh and love".

Dad retired from Carrier in 1990 but never fully retired from the consulting world. Through his company ARTSCO, he continued to provide air-conditioning expertise to companies well into his 90s.

He and Mum always planned to return to Prince Edward Island and in the mid-1980s built a cottage on the shore at Kildare. The cottage soon became a place of family gatherings, corn boils, Thanksgiving dinners and even more love and laughter. Mum and Dad moved to Alberton, Prince Edward Island in 2003. They shared their time between an apartment in Alberton and the cottage. Dad maintained his involvement with the Anglican Church (Christ Church Kildare Capes), the Masonic Lodge and the Legion. Dad was recently awarded Life Membership in the Royal Canadian Legion.

Dad always had a remarkable mind. He embraced technology and, even up to the very end, used his iPhone daily. Somehow, with those big hands of his, he was able to text us to stay in touch wherever we were in the world. FaceTime provided a wonderful opportunity for him to connect with all of us. Of particular note was his ability to recite from memory the entire "Desiderata" poem at birthday, Thanksgiving and Christmas dinners.

Dad is survived by his children: Ian (Lynne) of Cole Harbour, NS; Laurie (Neil Sedgwick) of Priddis, AB; Anne (Ron Fourney) of Orleans, ON; Pam (Doug Rideout) of Upper Tantallon, NS; Scott (Debbie) of Kildare Capes, PE; and Andrew (Heather) of Bedford, NS. Also survived by fourteen grandchildren and eight great-grandchildren. He is also survived by cousins, Rev. Sylvia Dyer of Scotland and Lona Crane of Alberton, as well as his nephews, nieces and cousins.

Cremation has taken place. A private family service will take place on September 5th in Kildare Capes. A Celebration of Life and interment will follow at a later date.

As an expression of sympathy, memorials to Christ Church, Kildare Capes or a charity of choice would be gratefully accepted.

Mum passed away in 2013. Dad missed Mum dearly and brought her flowers every week. On August 11th, they would have been married 75 years, but now they are together again. As Dad wanted, the gravestone will read "Art and Phyll – together forever".  Dad, we love ya.

Resting at the Rooney Funeral Home and Chapel for private family visitation. Due to the COVID 19 pandemic there will be a private family service on Saturday, September 5th at Christ Church, Kildare Capes. A Celebration of Life service and interment will follow at a later date.

Memorial donations in memory of Arthur can be made to Christ Church, Kildare Capes (Endowment Fund) at the following web page: https://www.canadahelps.org/en/dn/51668