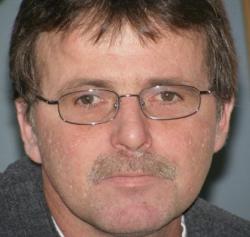 It is with great sadness that the family of David John Skerry of Summerside, PEI, announce his passing on March 16, 2020 at the Prince County Hospital Summerside. David was born in Toronto, ON, on October 17, 1963, the son of Edward Skerry of Cascumpec and Brenda Batherson (nee Inman) of Summerside.

He was brother to Richard Edward Skerry, who predeceased him on December 26, 2019. He will also be sadly missed by his partner, Natalie Trahan, and his daughter, Sarah Skerry.

David will be lovingly remembered by his many aunts uncles, and cousins and by his relations to the late Jack and Daisy Inman of Alberton on his mother's side, and in relations to the late Harold and Gertrude Skerry of Nortport on his father's side.
David was a well known carpenter by trade and a friend to many.
Resting at the Rooney Funeral Home and Chapel, Alberton. Complete funeral arrangements to be held in August 2020, from where a celebration of life service will be held for both he and his brother Richard Edward Skerry. Interment in the Sacred Heart Cemetery.
www.rooneyfh.ca
Visitation
No visitation
Visitation Time