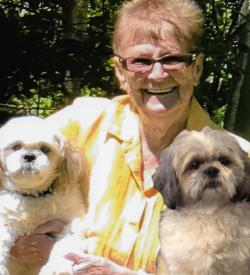 The death occurred suddenly at the home of her daughter and son-in-law, on Sunday, January 27, 2019, of Shirley Mary Doucette, age 72 years. Born at Nail Pond, PEI on January 23, 1947, she was the daughter of the late Fidele and Florence (nee Doucette) Perry.

As an expression of sympathy, memorials to the PEI Humane Society would be gratefully appreciated.